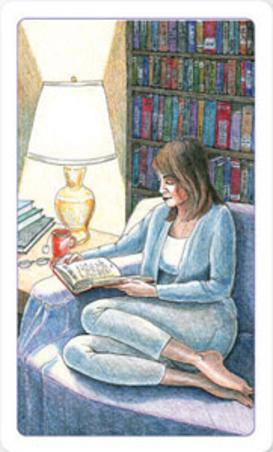 Back To Case Examples 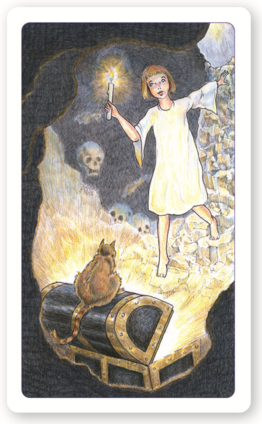 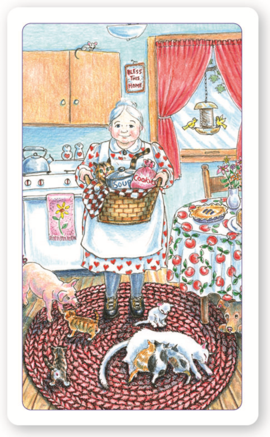 Initially, I had Elaine imagine a safe place for any parts needing comfort and rest. Elaine visualized a beautiful glen with shade trees, big rocks, and a flowing creek illuminated by Divine Light.  This worked well, as one of her first parts to present was a Child, curled in a fetal position, wracked with a broken heart.  Standing over the wounded child was her fuming Anger.  I asked Elaine to ask for spiritual guidance to help move these parts out of their fixed states, and the Guide she calls Sophia appeared on the spot.  Sophia took the Child and Anger to the glen where Divine Light filled them with Self-energy:  Anger was transformed into Bouncer and the Child, comforted and put under his protection.

Elaine keeps a journal and records each session. Elaine has given her permission to use the following excerpt from her journal as a case example. It is written in her voice. 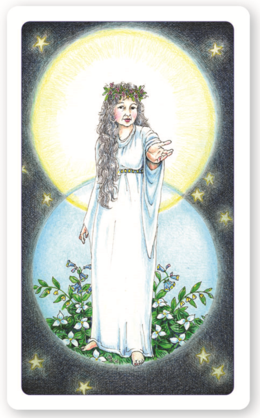 I start out in my glen (safe place) with all of the parts that have been defined to date in their usual places. Bouncer and the Child, Thinker and Solitude are still sitting quietly by the creek.  Truth and Sophia are in front of me.  The Divine Light is there in the distance.

Through a marital crisis Elaine experiences the primal emotions of heart-break and extreme anger which dominate and restrict her life. To represent these states Elaine chooses the Child card, which carries her innocence of trust and love, and the Angry Bull card,  which represents her rage, not only toward her husband, but also toward God, for violating all that she held righteous and vested.  In previous sessions, Elaine has identified and worked with other parts, not all of which are found in the Inner Active Cards deck - Thinker, Solitude, Truth, and Helper, and the Spiritual Guide, she calls Sophia. In this session Sophia appears and takes the wounded Child and Anger to the Glen, where they are filled with the Divine Light of Self-energy and unburdened of their extreme emotional pain, rage and fear. Then Elaine is confronted with the "Do-Gooder", a part that appears as a one-dimensional card.  Elaine immediately recognizes this card as a persona she had developed to meet her internalized "Christian" standards of virtuous behavior, much to the neglect of her own true introverted nature and talents.  Elaine rips the Do-Gooder in two, and out steps "Burn-out", the card that represents how she truly feels when the Do-Gooder.takes over.  Elaine is reconnected with her Spiritual Core, Truth, and through the eyes of Truth, is given the clarity to see who she really is; a deeply compassionate, contemplative, whose heart is always safe and indestructable. Through the wisdom of Truth, Elaine will further explore and develop her innate strengths and talents, charting a way to genuinely contribute to the world as a whole, compassionate introvert, whether the marriage holds or not.

Elaine has a Thinker part who is good at analyzing, but who also likes to take over the living room. While a Thinker part can keep a person rational and protect against emotional pitfalls, a Thinker can keep one in the intellect, avoiding emotions that need attention or signal warnings.

Helper is a major player in Elaine’s Inner Family. Elaine enjoys helping others when it involves projects she likes to do. Sometimes, however, Helper takes on too much.  Because  helping others is part of her moral value system, Elaine feels good about herself when she volunteers at church. She also believes helping her husband achieve his goals will strengthen their marriage.  Consequently, Elaine often sacrifices her own needs over the needs of others. 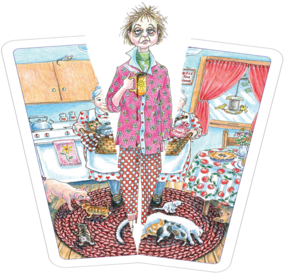 Do-Gooder (left) is featured here with Burn-out (right).  Do-Gooder presented as a one-dimentional card reveals that this part is a façade operating from internalized “shoulds and oughts”:  “As a Christian I should do this – I ought to do that…” Also, Elaine's husband has an extroverted personality and often coerced Elaine into extending herself into his social, political, career and personal interests, beyond her introverted comfort level. Although Elaine believed she was serving her church and husband for virtuous reasons, she realizes now that her behavior has not been rooted in Self-leadership.
Burn-out is how Elaine really feels. Elaine’s sees this when she looks through the eyes of Truth. 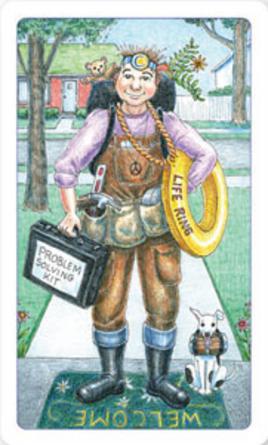 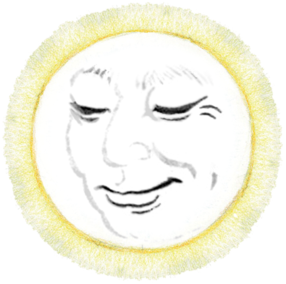 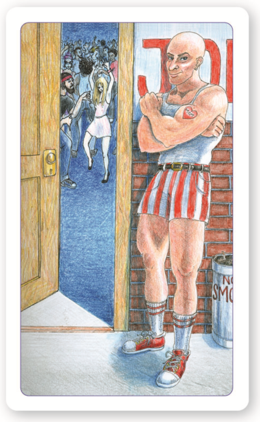 The image of the Do-Gooder card comes to me, but the image is just that – only an image: no depth, just a card with a white boarder. She is fixed in her place on the card, no emotion or movement. Sophia and I both look at it and then behind it. It really is just a card.  Human sized, but just a card with a blank back.  I reach up and grip it at the top with both hands and easily rip it in two down the middle.  The image of Burn-out comes into focus where the Do-Gooder card was.  But this character has substance.  It is a part and not a drawing. Sharon has me ask her what she needs and she says “Get me out of here!”  Then I pick up the pieces of the torn Do-Gooder card and toss them into a fire.

Elaine has an introverted personality temperament and enjoys quiet time by herself either reading, listening to classical music, knitting or walking in the woods.  Solitude is the name of her part that needs quiet time to recharge.  Solitude is allied with her Thinker part; she likes to read nonfiction, e.g., history, philosophy and science. Solitude is also allied with her spiritual part Truth, which is not featured in image. Elaine admits that she often neglects these parts, who are essential to her psycho/spiritual and overall health:  she just has too much to do!

Bouncer, left, was assigned to watch over Elaine’s Child part (right). Bouncer serves as a protector for a curious, but vulnerable little girl with a tender heart .

In “real Life” a Bouncer is a person hired to keep order usually at a bar or night club. In the book Parts Work (page 19), the Bouncer is shown as a healthy form of Anger.  When child parts are hurt, Anger will often come to the rescue, which is normal, but in an extreme form, can do more harm than good. Bouncer will alert Elaine to trouble, giving her the courage to stand up for herself, and the power to say "NO!" to those who might take advantage of the child's soft heart. 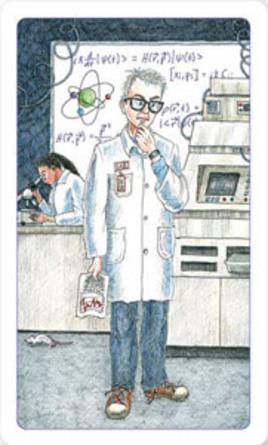 Elaine is a 55 year old woman who has been in Parts Work therapy for the past four months.  She is recently separated from her husband of 32 years since he began an affair with a 34 year old woman he met at a party six months ago. This woman is also married.  Elaine was working as bookkeeper for her husband’s Insurance Agency, but now she is unemployed.  Presently she lives alone in the country at their home, raises farm animals, maintains a large garden, and assists her 88 year old mother who lives two hours away in the family house by herself. Elaine’s husband, Ryan, claims to still love her, but is refusing marriage counseling because the condition requires he stop seeing his lover. Elaine believes Ryan is suffering from a mid-life crisis, will snap out of it, and return to her. This event, however, has shaken Elaine’s world and precipitated a spiritual crisis. She has always prayed for a strong, enduring marriage and cannot resolve why this is happening. Elaine has a strong affiliation with her church, serving on committees and volunteering in the soup kitchen, however much of her social life was through her husband's network of friends.  Elaine and Ryan did not have children.

Elaine has read Parts Work: an Illustrated Guide to Your Inner Life by Tom Holmes and has taken well to Parts Work therapy.  I began using the prototype deck of Inner Active Cards with Elaine and she has since used many of the images to represent her inner parts as well as imagining her own. Having a well developed ability to visualize, Elaine did not choose to create her own images of these special parts.